Wow, did you notice how fast January and February have gone by? I just can’t believe it. 1/6th of the year come and gone.

I just noticed that my first post “Happy Resolutions” was in 2015. Ha.  Three years gone by. And that resolution to blog more often.  Well we are at it again.

I just talked to my comrade over at San Juan Gamer and we discussed among other things putting up shorter posts so as to get in the habit without killing a day.  Content needs to be good, but needs to be often too. The whole point of this blog is to try to express the battle of being a Christian and being consistent in the Word while there are so many distractions going on and life is hurtling by.  Dragging us along. Or maybe we are pushing it.

Speaking of time going by.  My oldest is turning 32 tomorrow.  Happy Birthday Angie!!

What am I thinking.  She’ll never read this.  Gotta work on marketing………See ya In The Dash.

No Comments on Been a while..

My Beloved was watching, and I joined in, the movie –>  Fat, Sick and Nearly Dead 2. 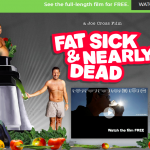 I wanna say I’m not an extremist. I don’t hold that all those other folks (from eat a burger a day and don’t delay to save the earth eat vegan) are nutty. Seems there should be some reasonable balance though. By reason I mean, think about your health habits. Don’t over indulge and don’t jump off the cliff. Theresa and I have been somewhere between Vegan and Vegetarian for about 4 years now.  She’s more Vegan, I’m more vegetarian ( that cheats once in a while. ) more on that some other time.

Any way we were watching the movie and I’ve always wanted to get more salads in my diet. Do it in a way that I don’t have to depend on Theresa to “fix me supper.” I know. I am a traditional/historic, “let the wife cook”. She certainly has a talent for it. Why argue? I do very little food prep. I don’t even really know the vernacular. So I decided to start making smoothies. Yep didn’t even really know the basics about that. Theresa is getting over the frustration of having to explain everything to me. And I really appreciate her patience with me. Especially since I don’t hear well and don’t listen well either. What a pain I am.

My first smoothie was a lettuce (not head of lettuce, the leaf kind, spring mix kind), baby carrots and almond milk in a Bullet blender. Single serving. Yikes. Lots of roughage on the top. Maybe shoulda done it longer but here I was. Had to chew my way through to the liquid. I added a little apple juice to sweeten a bit. I thought about some stevia, but decided to try and stay all natural.

Theresa said I should use Joe’s Nija Blender (link). His sisters gave it to him for his birthday. WOW! What a difference a blender makes. Be careful it’s sharp!

My second attempt was a bit more then 2 servings (seems they are all turning out that way.) Lettuce, baby spinach, a banana, baby carrots with an Almond milk base. Not bad at all. Added some apple juice to sweeten after I tested it. Theresa even said it was pretty good. She had told me we need to keep it washed up so the next person can get to blending. She had cleaned up and showed me her technique in adding a little soap and then running the blender. Cool. I can do. Don’t want to leave a mess.  Next time. 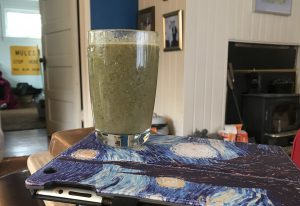 My third attempt was a banana spinach carrot smoothie with once again an Almond milk base. Turned out great!!  So I cleaned up. Pulled the Ninja blades out and rinsed them off. Decided to run my fingers along the blade flat edge to get the debris off. Wrong!!! Sliced and diced my left hand real good. Don’t ever do that; never!!

Ok my fourth was an Apple (good sized, yellow Granny Smith, core it leave the skin on), spinach, carrots, Almond milk. Great. I had it in addition to my regular oatmeal  breakfast. Theresa told me that the smoothie was suppose be a meal replacement. I said I did not sign up for any plan. Just trying to get more veggies and fruit in the diet. I have to think about it though. What is it I am trying to do. Hmmm

OK, so today I have to start using the Kale I bought before it goes bad. I kinda went overboard and bought too much greens. Theresa said let the store manage the stock.  Only get enough for a couple of days. OK, so Kale. I thought about it and wondered if I should just put the leaves in or the whole stock.  Decided to look it up on the Internet. Question? How to prep Kale for a smoothie? Found the following website.

Preparing Your Kale for Smoothies

Not quite what I was looking for.  But I did have some interesting information about how Kayl may affect the body which then told me I should probably blog this because the information might be a valuble to somebody. Thyroid info in there. What Kale can do to the digestive system. I’ll leave it at that.  Watch the video….

In the end I took a large orange, peeled of course,  six stocks of Red Kayl with the stock trimmed up to the first leaf, a cup of Almond milk, and a quarter cup of walnuts. I called it Orange Kale Smoothie. Not bad at all. A little thin.  Could have added some spinach to thicken it up. That Almond milk is turning out to be a nice base.  The walnuts added a little bit of grit I think. Not a bad deal, but might no like it. I like it. I need to start thinking about the number of calories in each concoction.

So there you have it. The beginning of the smoothie era. I’m getting more veggies into my diet and have a little fun at the same time. No smoothie is the same as a last.

See ya In The Dash —

No Comments on Smoothies a Start One of my New Years resolutions is to blog at least once a week.  I am not much of a writer or communicator so this will be a challenge to keep it going as the year progresses. Hope it brings a chuckle at times and a thought at others. Here’s to it not being a burden to me writing nor to you reading.

I’ve other resolutions going. Usually they don’t hold up very long. Some last 2.75 days. Others trickle out after a couple weeks. Once in a while one will take hold for a few months.  By then I’ve forgotten the resolution was made and it falls by the wayside or some metamorphosis thereof exists in my routine and I don’t even know it.

One is I’m giving it a go to read through my Bible in a year.  I’m using my iPad to do the reading with an app.  The app has a reading plan feature.  This morning I read though the prescribed items and a little later the app reminded me to don’t forget to read through the prescription. Yeah! I beat it to the punch. I’m ahead of the game now.  We’ll see how it goes.

Another is my eating habits.  I’m a glutton for sweets and other “not good for me” stuff.  About a year ago Theresa and I challenged each other to eat healthy – in this version – veganish.  Theresa’s father died at the age of 44 long ago of a heart attack.  So in honor of him we decided to eat a Plant Based diet patterned after the http://forksoverknives.com scenario. Been an interesting year at that.  I was real good the first three months – our initial commitment. By June I’d lost 30 pounds, then things leveled off for a bit weight wise, still eating right. This Christmas season has been tougher to make good choices.  I’m not eating meat, but I have lowered my standards a bit to all those tasty treats.  I’m sure I’m getting some egg and milk in those morsels. The whole goal of the plan is to stay away from animal protein and eat non-processed/enriched foodstuffs. So my resolution starting today is to commit to the commitment again. I’m up about 7 pounds, but still feel I’m living a whole lot better the a year ago. Need to ….  aw, I won’t bother you more with it.

Only thing left to say is Go Hawks! http://seahawks.com

Staying in the race,